I have worked in San Francisco for the past five years, arriving at the Civic Center BART station every day.  Over the years I have met countless people who are in need.  In need of food, medical care, shelter and in some cases just human contact and a friendly “hello”.

I have become friends with several of the people I see each day, including Robert.  For the past 10 years, Robert has entertained commuters with his accordion music with his beloved service dog Vera by his side.  We chat most days, talking about music, Vera, or what is going on in San Francisco and the world.

In March, Robert shared with me that Vera tore her ACL and was in need of a very expensive surgery, one he could never afford.  He was very distraught about the situation.  Knowing how important Vera is to Robert’s well-being, my friend and I promised him we would help.

Robert and Vera brighten thousands of people’s lives each day, and we knew people would want to help Vera get the medical care she needed.  We considered setting up a GoFundMe campaign, but they take a % of each donation and the money would have to go directly to Robert, something we were not comfortable with.

I was familiar with HandUp, a platform that Project Homeless Connect leverages to support Participant’s in raising funds for emergency needs, and thought that would be a great fit for Robert.  I knew that PHC was a partner with HandUp and contacted them to see if they could help Robert.  The PHC staff were so kind and helped Robert set up the HandUp Campaign.  It was so easy and quick – the campaign was live immediately following the appointment with PHC.  They even provided him with business cards with his HandUp Campaign URL to share with his friends and people he knows from BART, and the staff all came to pet and meet Vera!  Within 48 hours the fund raised more than half of $3,500 needed for Vera’s surgery!

While the money raised is important, the outpouring of love and support for Robert and Vera has been inspiring to us all.  Robert is very touched by the support of friends and strangers and is no longer is he distraught about Vera’s situation.  He knows there is a community of people who care and want them both to be happy and healthy.

Thank you Project Homeless Connect for having the resources to bring the community together to help our friends in need.  We all appreciate and benefit from your work!

You can support Vera on the Campaign HERE. 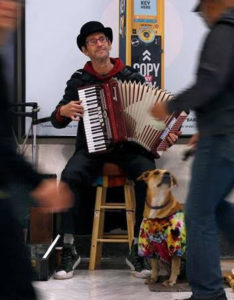