68 participants picked up their glasses at our monthly Optical Day

3 new amazing volunteers in our office. They will be offering hospitality with dignity to our participants and taking on some admin tasks to help our Resource Specialists spend time on programs

How the PHC team spent time with Participants 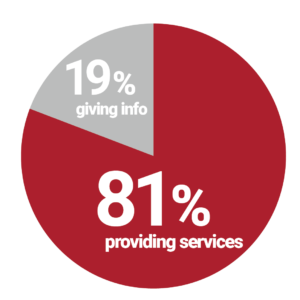 A Long-Time Participant Moves Into a New Home
“Casey came into the office with a letter stating that he could move into an SRO that day if he had $259 for a security deposit and $158 in prorated rent for the month. Casey had been visiting Project Homeless Connect’s daily services since 2012 and had been without housing throughout that time. I worked with Casey to ensure he had a plan for paying rent moving forward and agreed to support him with the cost of the security deposit. Glide was able to support Casey with the cost of the prorated rent and he was able to move into his new place right away!”
Alison Van Nort, Services Manager
____
Working Toward A New Start in a New City
“Roger came in to PHC during drop-in hours to redeem his HandUp points on a one-way airline ticket to Seattle after he had been talking to the services team for many months about moving there. He would come in for a appointment, go over prices and dates, and then say he would purchase a ticket next time. Finally, it happened! Roger is moving to Seattle on Nov 18th to start a new life there. Roger plans on joining the union in Seattle and continuing to work. Additionally, with his HandUp points, Roger was able to pay off some of his San Francisco union dues.”
Deia de Brito, Resource Specialist
____
Contact With Employer Leads to Being Hired on the Spot
“I worked with Martin to support him in applying for seasonal work, starting with a job with Marathon Staffing to work at the Dreamforce Convention. Martin has worked a variety of seasonal jobs in the past and was looking forward to earning an income again. I supported Martin with the application process and the additional paperwork that was required. We contacted Marathon Staffing on several occasions together to make sure that Martin was on-track throughout the process. Martin was contacted and invited to attend Orientation and showed up an hour early. Martin says that he was hired on the spot!. Martin reported feeling “excited that everything went smoothly”. In addition to supporting Martin in applying for this job, he obtained some other employment resources, including places to go for job training, so he can have tools to move forward after this job.”
Leah Campos, Resource Specialist

Project Homeless Connect  is committed to our mission to provide essential services to our participants, with modified services for community health and safety. Please refer to our COVID-19 (Coronavirus) Preparedness Plan for more information about our continuing services.